13.5 months? Wouldn’t you just round that to one year? That’s what I always thought before having Corban. I actually thought it was kind of ridiculous when people would say their baby was “13 months old.”

But now I’m the one doing that, because, as it turns out, a lot can happen in a month. 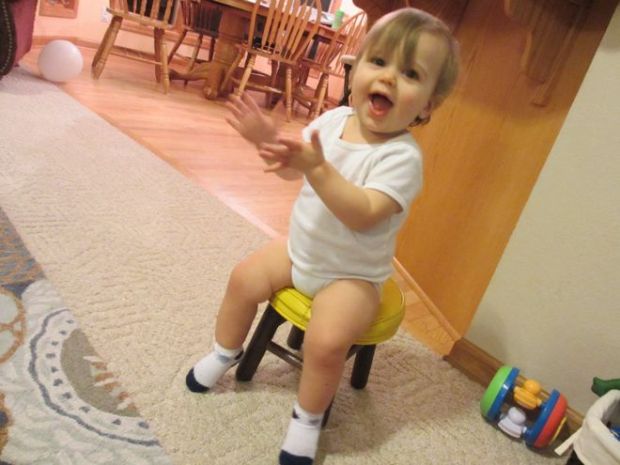 It’s hard to believe it’s only been roughly six weeks since Corban’s first birthday. It seems like he’s changed so much in that time, but then again, I think I say that every month. Here are some milestones of the past month and a half:

He is getting much more proficient at communicating with us. It’s amazing to witness this process! He points to his mouth if he sees food and he’s hungry. He will clap and sometimes wave on command. He gives sloppy, open-mouthed kisses if you ask for one  (the best!). He will say “woof, woof” if he hears someone talking about a dog or sees any animal resembling a dog (this includes cats — both live and in books — and just about every farm animal). Actually, we’re pretty sure he just thinks animals in general are called “woof, woofs.” We’re working on introducing some meows and moos into his vocabulary. 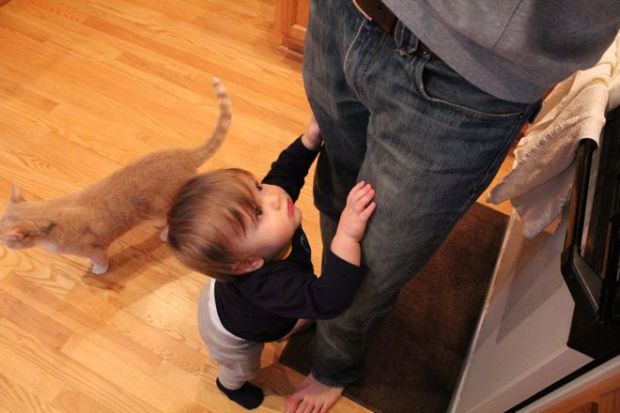 The biggest physical development of these past six weeks is his ability to stand unsupported. He usually will only do this if you’re sitting on the floor with him and stand him up, but he finds it hilarious and waves and laughs the entire time he’s up (the video at the end of this post demonstrates this). We think his record is about 15 seconds. This new ability has made him much more proficient at walking while holding our hand(s), and he can walk across the entire house this way. If he really wants to get somewhere though, he’ll crawl (super fast) or reach for us to pick him up and then point to where he wants to be carried. 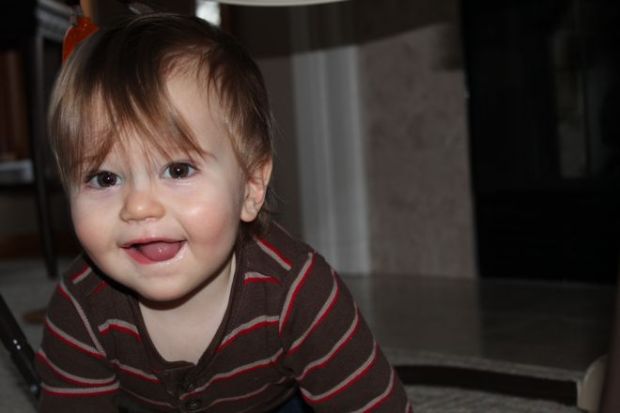 His hair is out of control! Actually, it’s just the front that is an issue. It doesn’t like to stay brushed to the side and is getting quite long. But I’m still not emotionally ready for the first haircut, so we’ll continue to attempt to sweep it out of his eyes. It doesn’t seem to bother him at all.

He loves zooming cars around on the floor, especially little Hot Wheels. Still enjoys dancing, and sometimes “singing” with us. Buttons and touch screens are absolutely fascinating. 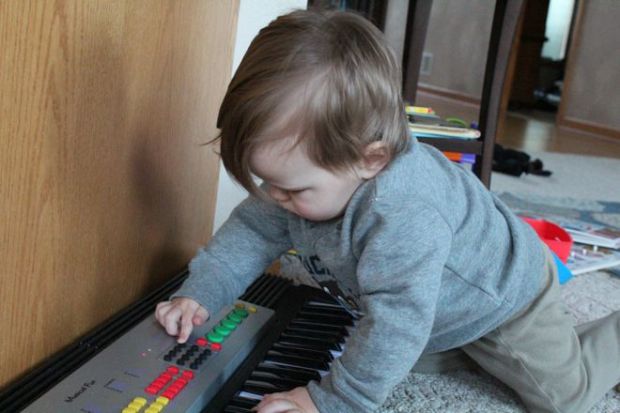 He’s really into books, and has definite preferences for certain books. If he’s in a picky mood he will reject each book you offer until you hold up the one he wants. This is usually any of the three “Spot” books we own (they are the best! Perfect size, storylines, flaps, pictures, etc.), “Brown Bear, Brown Bear, What Do You Hear?” or “Where is Baby’s Bellybutton?”

Corban now uses his shape sorter as a shape sorter (rather than just a bucket) and after a few tries can usually fit the shape through the correct slot. He adores his counting piggy bank my parents gave him for his birthday, and also got tons of use out of his Little People nativity set from Peter’s parents before we put it away for the season. 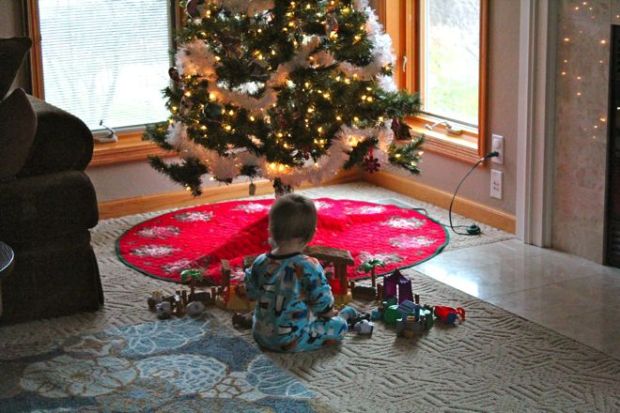 He also loves putting this plastic bucket on his head – his “helmet” – and wearing it around while talking to himself in the echo chamber.

Ah, yes. Right when he turned one, it seemed time to officially start the process of weaning. We are now down to one nursing session a day, in the morning right when he wakes up. I always thought the bedtime nursing would be the last to go, but we both seem to enjoy it most in the morning. I’m guessing my milk supply will naturally deplete over the next few weeks and that will probably be the end. *Tear!* But weaning has actually been very natural and comfortable (minus a few days of physical discomfort for me) for us both so far. I’m thankful for that.

Thanks to my ridiculous freezer stock of breast milk, he still has at least three bottles of breast milk a day and we probably have another month of milk left. I admit, it is nice to clear some space in the freezer, though.

I will probably do a separate post about the weaning process, so leave a comment or email me if you have any questions!

I almost forgot, Corban experienced his second Christmas and New Year’s Eve this past month. He got to see two cousins who are a little bit older than him.

Can you handle this?

Christmas Eve was such a sweet (and toy-filled) night with my mom’s side of the family.

We didn’t spoil him on Christmas Day, but he loved his new sled.

Corban also got a kick out of riding around in Pa’s walker like it was a stroller. 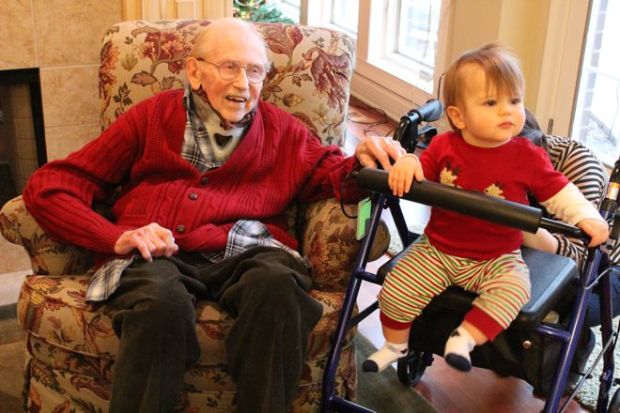 Huge improvements/changes in sleep this past month! I finally weaned him from nursing in the middle of the night, which doesn’t mean he is consistently sleeping through the night (yet, at least), but he is sleeping through the night a lot more. Peter and I switch off nights getting up and getting him back to sleep if need be. This usually involves replacing the pacifier, re-covering him with his blanket and rubbing his back for a couple minutes. I’d like the back-rubbing part to go down the drain, but we’re taking this one step at a time.

He is definitely down to one nap a day now. That was a somewhat rocky transition, but now he naps for 1.5 to 2 hours starting in the late morning or early afternoon. This is much better than our previous mid-morning and late-afternoon nap schedule, which often involved either a battle for the second nap or a cranky, awake baby.

Corban’s appetite is sometimes shocking. He’s unleashed an undying love for frozen peas/carrots blend, and if he’s in the right mood he can eat half a bag in one sitting. I maintain that he is welcome to eat as many veggies as his little stomach desires! His other main food groups are bread, Cheerios, bananas, grapes, scrambled eggs, plain yogurt and cantaloupe. I need to find some more easy foods for him because the aforementioned make up probably 90% of his diet.

He has mastered the art of drinking water from his straw cup, and we also introduced a travel mug-like sippy cup (this one, specifically). It’s basically a baby version of a travel coffee mug, with a lid with a small opening. I like it because he is learning to drink like you drink from a regular cup (which is the end goal) — just with less spillage. I took the no-spill suction thing out so he can drink it without sucking like he would from a bottle.

Life is good with this little one in it. My love for him grows as he grows. Each new development and personality quirk is such a blessing.

Here’s a video of Corban from earlier this month when he first started standing on his own (right at 13 months old). Note how thrilling the novelty of it is to him!

P.S. I completed my attempt at taking and posting a photo of Corban each day of his first year. Here is the finished project. 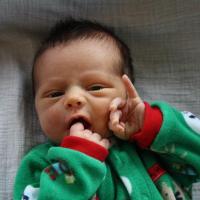 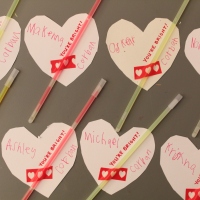