At Corban’s four-month checkup, our pediatrician gave us a bunch of information on starting solids (purees) and gave us the go ahead to start whenever we’re ready.

Three days shy of his 6-month birthday, we finally started. 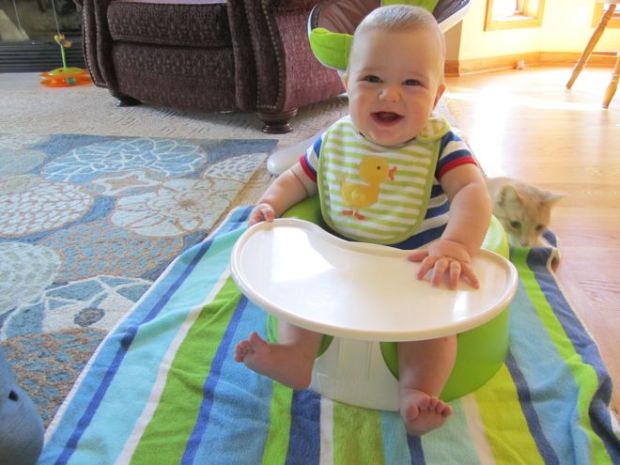 I knew C wasn’t quite ready at 4 months. He didn’t show any interest in food and was doing just fine on breast milk alone (and by just fine, I mean he was gaining weight like crazy, had chipmunk cheeks and sported sausage link thighs.) Additionally, based on the recommendations of the American Academy of Pediatrics and World Health Organization, I wanted to exclusively breastfeed for the first six months.  I was surprised to learn that only 10-15% of American babies are exclusively breastfed until 6 months, but nevertheless, I felt this was right for us.

For the past few weeks though, it has become clear that Corban was ready for some real food. He started grabbing for food when we would eat with him in our laps, and would stare us down while playing across the room when we had food or drink in hand.

Because he is so grabby and loves putting things into his mouth, I started researching baby led weaning (BLW), which I’ve heard a lot about in the blog world. Basically, baby led weaning skips purees and starts your child on finger food right from the start, but the start isn’t until he can sit up on his own, so usually at least 6 months of age. The child then feeds himself (with parental supervision, of course). This lets baby control the feeding experience and helps him learn to chew and swallow at an early age. There are a lot of other benefits, including not having to puree foods or buy baby food, and being able to eat alongside baby instead of spoon feeding.

I am definitely sold on giving BLW a shot, but since Corban still can’t quite sit up on his own, we decided to start with brown rice cereal from a spoon and see how that goes before trying baby led weaning.

Did you know you can make your own brown rice cereal? It’s really easy! I’ll post about it tomorrow. 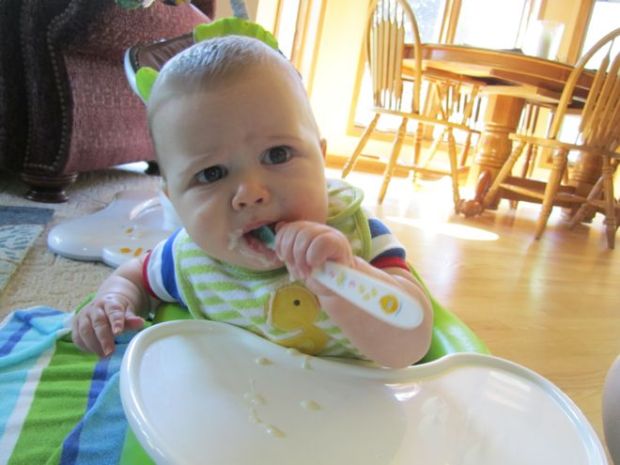 His first reaction was that of curiosity. He was excited to put the spoon in his mouth, but didn’t quite understand what was coming off the spoon.

To stick with the BLW concept of baby learning to feed himself, I tried to let Corban control the spoon. This was fun, but he wasn’t quite coordinated enough to get the food off the spoon and into his mouth. It just kind of ended up everywhere, so we helped him out quite a bit. 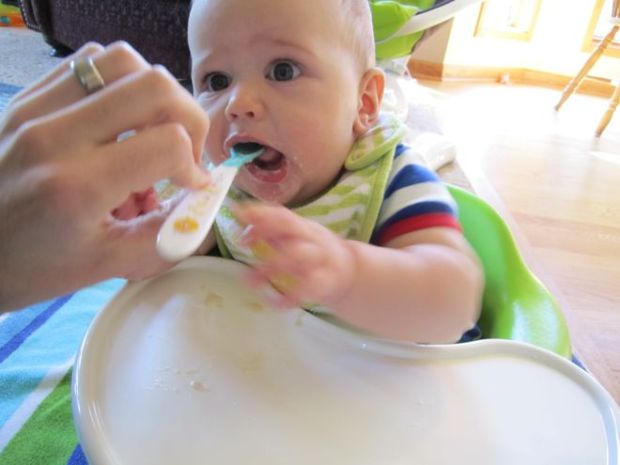 I think he liked playing with the spoon more than actually eating the cereal. 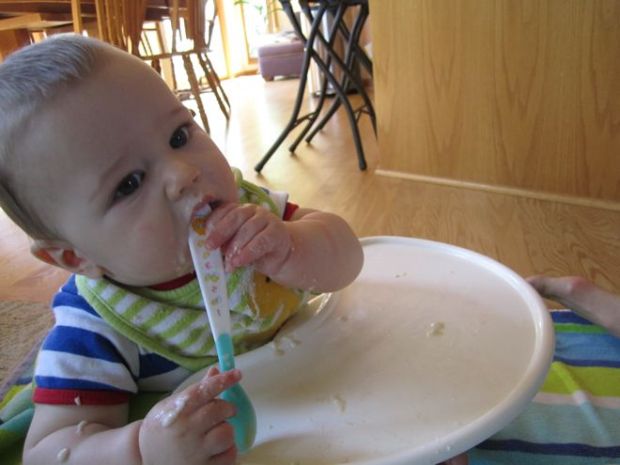 There were lots of fun faces though.

And a big mess at the end. 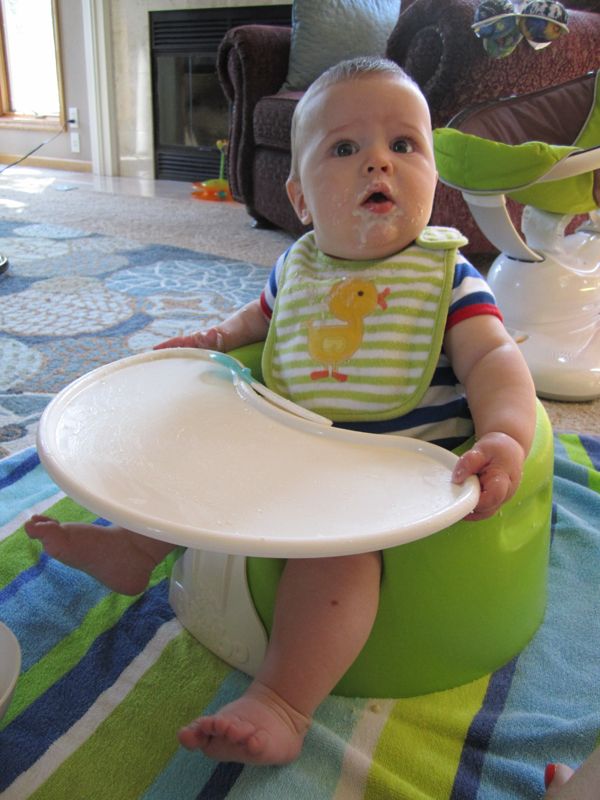 We’ve had two more cereal feedings since, and he doesn’t seem to be the biggest fan of brown rice. I’ll continue for the next couple days with it, but probably switch to something more exciting like sweet potato or avocado slices by the end of the week. I think he’ll enjoy picking up chunks of food and tasting them himself.

Here’s a video of our first feeding – probably only entertaining to our family, but there’s a cute kitty interaction in the beginning (before we kicked Biggles out so he wouldn’t try to steal Corban’s food).

One thought on “Corban’s first solids” 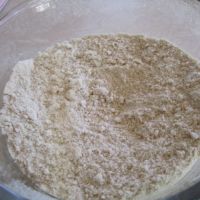